How my bum got iced

A slick road, shaded slopes, a lack of snow, the conditions neither diluted my anticipation nor rang any warning bells.  Tinkle, tinkle crunch, our boots smashed through the fragile façade of delicate leaf-like ice formations coating the upper slopes of Tahurangi. The southerlies had left their calling card. The fine rime needles weren’t here on my visit the previous fortnight.  The beard hadn’t had sufficient exposure to wind and rain to reach full growth,  allowing our crampons to shave it off step by step. Rime is an excellent micro forecast, patches of luxuriant growth indicating the most wind exposed aspects and spots of thin stubble the sheltered places. 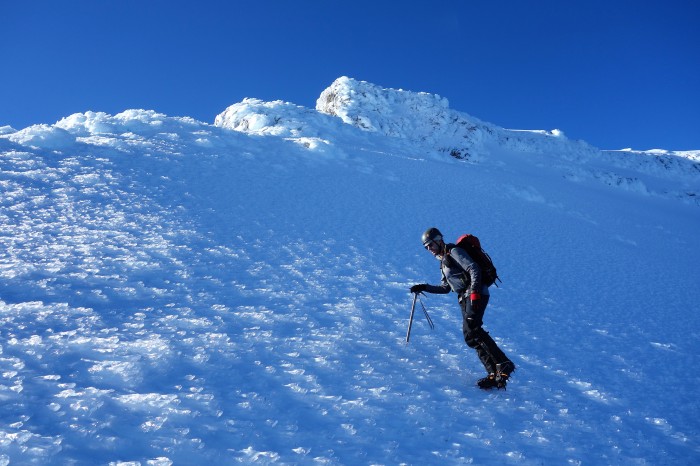 At first the musical passage of rime chips seemed charming, the crystals slid quickly across the glassy surface forming rivulets that trickled down the mountain like a glittery hail slide. The dry powder underneath was easier to walk on too. As we ascended larger pieces of rime crashed towards us, dislodging more pieces. The mountain’s china was being smashed then hurled to the ground where it bounced randomly hitting anything in its path, mostly us.

I took hits on my legs and arms. Small balls of ice travelling at speed sting on impact far more than a sloppy snowball causally chucked by a cheeky friend from a couple of paces. Gecko, climbing beside me paused to rub his hand. Above us the other two were no doubt experiencing the same conditions and contributing to our discomfort by dislodging more china. By unspoken agreement we traversed quickly across the fall line then waited facing downhill for a break in the showers then we’d speed across the slope. In this manner we eventually arrived at the saddle where all thoughts of the pummeling we’d just endured evaporated.

That view was as perfect as you’ll ever get up there. The Crater Lake was a vivid blue and the surrounding mountains glowed in the strong midday sun but the real stand out was the absence of a chilling wind. Marie ran around dispensing hugs and laughing. I sipped coffee from my thermos and glanced over at Gecko trying to gauge whether he was more pleased with his cheese and pesto roll which he was wolfing down enthusiastically, or with summiting.

“It’s just like tramping up a hill but the views are better!”

DJ who had seen the view a million times and climbed numerous spectacular mountain ranges by more interesting routes was bristling with boredom. I asked him whether we should ascend Tahurangi. He shrugged and gestured towards the lake, we could drop over the lip and down onto the flat slope below for lunch then head across to the saddle between Paretetaitonga and Tahurangi and circle back and down. He glanced towards Gecko.

“Heading to the summit of Tahurangi is out. Too icy.”

Sweat was trickling down my neck and I could feel my face burning as we walked to the descent spot.  DJ handed his second ice tool to Gecko then disappeared. Marie peered over the edge then turned to face into the slope preparing to down climb. After a step she looked up appealing for encouragement:

Marie’s footprints which Gecko would follow had broken the snow’s firm surface exposing the soft undercoat. There was also a rock to side step.  Not liking the look of it I moved to the unbroken snow a few metres to the left. Gecko inched his way down backwards resisting the urge to move quickly and get it over and done with.  Below him Marie shouted foot placement suggestions, from my position adjacent I joined in.  On safe ground he permitted his sunglasses to look up.

“That was close to the edge of my comfort zone!”

The three of us traversed one limb at a time, switching to down climbing once we were no longer above bluffs. DJ sped past growling about our poor technique.  I smiled realising the slope was flat enough for walking upright and frontwards. Gecko and I waved our arms and whooped. There was a slight smell of sulphur coming off the lake to go with the intense heat radiating off the still firm snowpack.  When we stopped for lunch DJ shared his chocolate and I made him drink the last of the coffee.

The sunlight sizzled and seared against the dark navy blue sky as we walked across the desert towards Paretetaitonga. Puffs of valley cloud wafted silently below us, from my rear view position it looked as though the others were dropping into thin air. We descended back onto thick crusty rime, the familiar tinkling sound returned. This beard was mature with generous tufts to clamber over or around. Pinballs of rime were coming down ahead of us as the ice melted off the cliffs near the top of the ridge. I halted thinking I may as well use my second tool but when I reached for it I discovered it was gone. 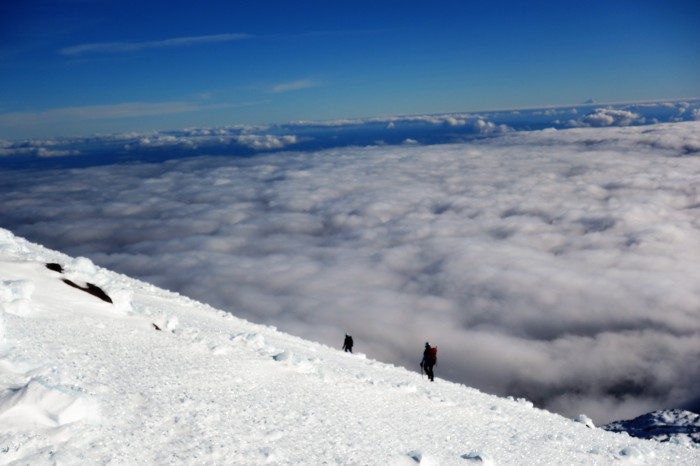 I tried to recall the last time I’d had it, at lunch time definitely. I asked DJ if he felt like heading back up a short distance to see if he could spot it.  With a sigh he issued instructions on the best line of descent and set off back up. I could see Marie and Gecko battling through a shower of angry pebbles of ice. The only option for minimising time in the fall zone was to cross it quickly and shelter behind large rocks. I caught up to Gecko and Marie beneath a small rocky ledge where I relayed DJ’s instructions. Marie was convinced heading down was best. I looked down and pointed to the bluffs we’d encounter. Glancing behind me I saw DJ approaching with the missing hammer.

“Move it. These conditions will only get worse!”

He sped off not bothering to down climb. I followed his lead, moving upright was far quicker.

DJ was yelling at me. I looked across as I moved towards my friends thinking we were lucky the pieces of ice coming down weren’t larger. Thump! I felt a sharp pain in my left buttock. I gasped, swore and shut my eyes for a long moment before I willed myself to take the two steps necessary to shelter behind a rock. I grasped its firm surface with both hands, shutting my eyes again concentrating on breathing in and out, in and out. Ice hurtled past to my left. I judged by the volume of the crashing sounds that the pieces were big.  I opened my eyes and called down to DJ that I’d been hit and needed to rest for a moment.  I wondered if a bone was cracked, if I’d be able to walk, what we were doing on a loaded slope on a warm afternoon.  Marie was instructing me to rub the spot where the ice hit. Slowly I straightened up and shuffled towards her.

There was still a series of bluffs and gullies between us and the easy ground and relative safety of the ski field. The gullies were mostly shaded and therefore attracted less falling ice.  Arriving at the next obstacle we considered a steep drop then crossing a sunny slope to the ski field. DJ started down. The rest of us hesitated.

“I don’t like the look of it, better to descend further and cross in the shade, more up and down but less risk of ice fall.”

We turned and stared at Gecko.

We headed down. DJ scouted for crossing points. He halted at a steep step. We watched in anxious silence as he hooked his axe over a rocky knob then swung round backwards and dropped down.   I volunteered to go next following DJ’s terse instructions, listening to the words of encouragement coming from behind me.  We stepped up the side of the gully and onto easier ground. With the ski field close we stopped to drink water and eat the remaining jet planes.

The day my bum got iced we were lucky. We got to carry the physical evidence of our complacency with us off the mountain along with a few lessons for future reference. Bumps on hands, the hematoma on my buttock that dwarfed the grazes and patches of purpling skin advancing down my thigh, beaten up limbs to go with bruised egos.